The magazine is beginner friendly and covers basic tools in openSUSE such as the configuration tool YaST, the KDE desktop, common applications and commands using the Konsole terminal.

System logs are incredibly important files in Linux. Learn about the results & solutions to complement your “Getting Started with Linux” magazine - https://t.co/B8BDbfSsGp

The openSUSE project received copies of the magazine to be distributed in conferences. Some of the magazines were sent to members around the world so that they could in-turn distribute them in local universities. I received a bunch of those too.

Presenting Jeshta, the latest #openSUSE geeko around, happy to receive a copy of #Linux Magazine that covers the @openSUSE story. 🐧 #Mauritius pic.twitter.com/R9ZWVoXrWe

Jeshta, junior developer at La Sentinelle Digital, who is among geekos that I have recently met was happy to receive a copy.

I contacted Gavin Sathan, Computer Science lecturer at the University of Mauritius to distribute the magazines at the university. He gladly spared me a few minutes from his “Operating Systems” class to talk about the project and distribute the magazines to his students. As the news reached the students that I’ll visit their class, one of them contacted me asking to bring some stickers if I still have. See, there are geeks around who like to adorn their laptops with those cool stickers. 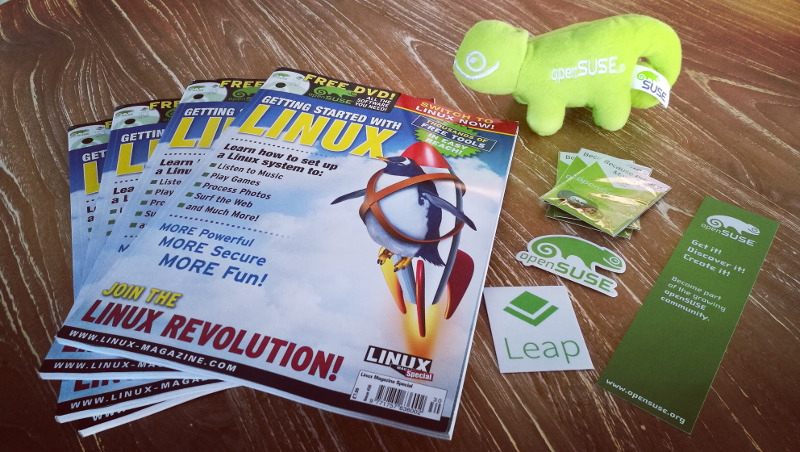 I arrived at the University of Mauritius at 11h00 today. Along the way I picked up Pritvi who was heading to a wedding ceremony but he accompanied me first. Gavin introduced us to his students as two folks who are active in local user groups.

I then briefly talked about the openSUSE project and its welcoming community. I told the students about the different editions of openSUSE, Leap & Tumbleweed, and what to expect from the magazine. I would not have taken much time from Gavin’s class; he was kind enough to spare those few minutes for me. I shared a few privacy cam and laptop stickers.

I wrote on the whiteboard the famous dd command if they’d use a Linux box to make a bootable pendrive.

I left the students my email address in case they’d like to reach out if they have questions. I thanked Gavin for allowing me to use his class for openSUSE advocacy. 🤓

City Council of Barcelona switches from Microsoft Windows to Linux