The University of Mauritius Computer Club organized a Career & IT fair on 23rd and 24th April 2014. Ibraahim, president of the club, invited LUGM and MSCC. I liaised with other folks within the Linux User Group to present stuffs. Nadim, Pritvi, Ajay and Pawan answered the call for volunteers. On the first day I reached Octave Wiehé Auditorium (where the event was happening) around noon. In fact, Nadim called me earlier asking to get a few copies of the LUGM membership form as some students desired to join the force. Well … That was something done already. The day before I printed around 25 copies of the membership form and a couple of LUGM info sheet as well.

As I walked across the auditorium’s corridor I could see several companies busy interacting with students. It’s a career fair after all. I was late, so I rushed till the stand that was allocated to LUGM. Ibraahim sent me a layout two days earlier. I knew where we should be. Jochen, Nadim & Pritvi were already there busy explaining stuffs to the young folks. I took out the printouts and handed them to Nadim. I met Computer Club folks who were seemed very taken up by the event. Yunus, Ratna, Ubeid, Kishan, Saamiyah and several others greeted me. It was lunch time & before I could even start advocating, Yunus came up with food. That was great, I needed to eat. Once I start talking about FOSS I might skip lunch.

The first few students I talked to seemed very much interested with our activities and wanted to be involved as well, by learning & sharing. I was happy to see such a spirit. The membership forms were filled up quickly. 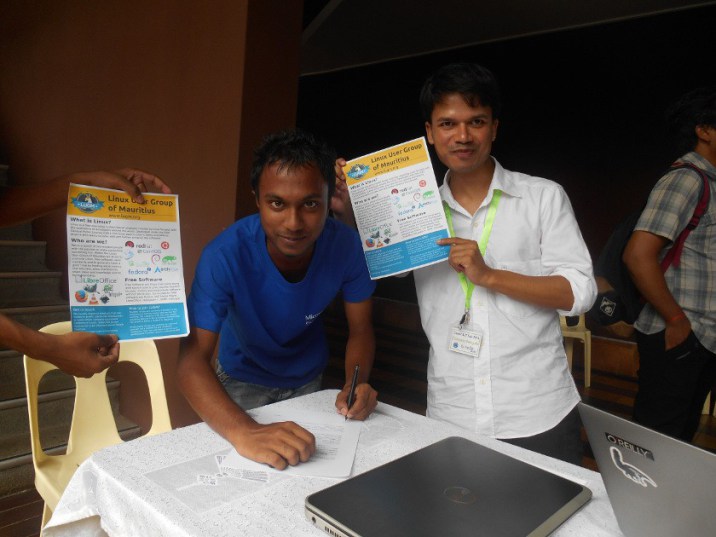 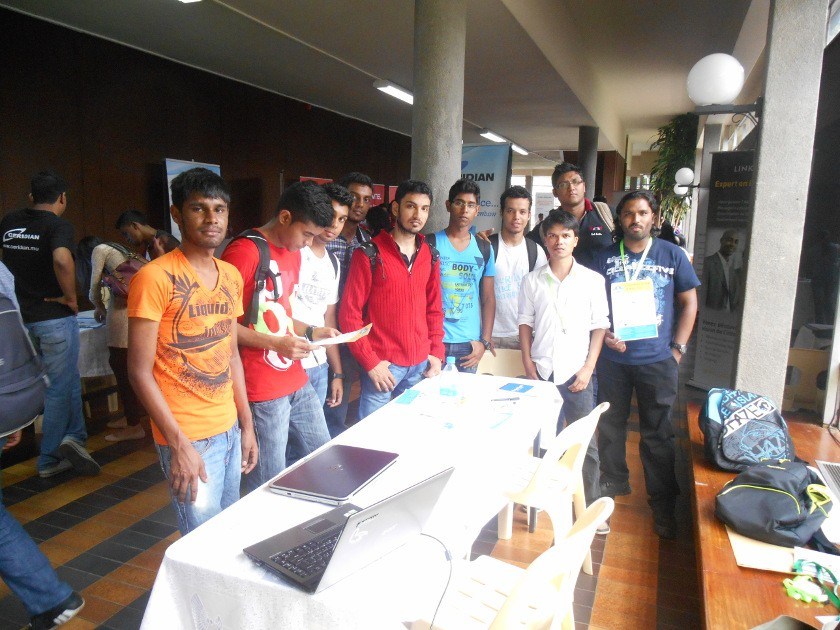 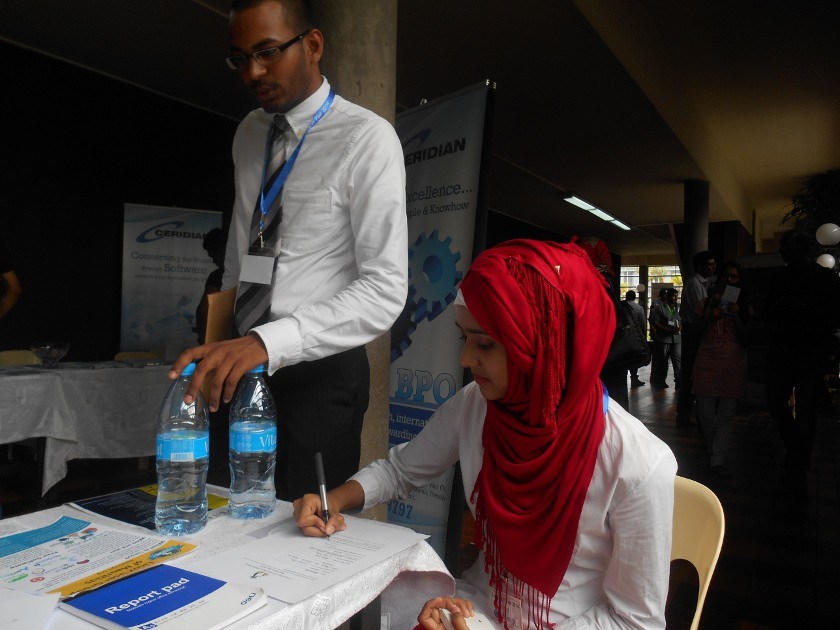 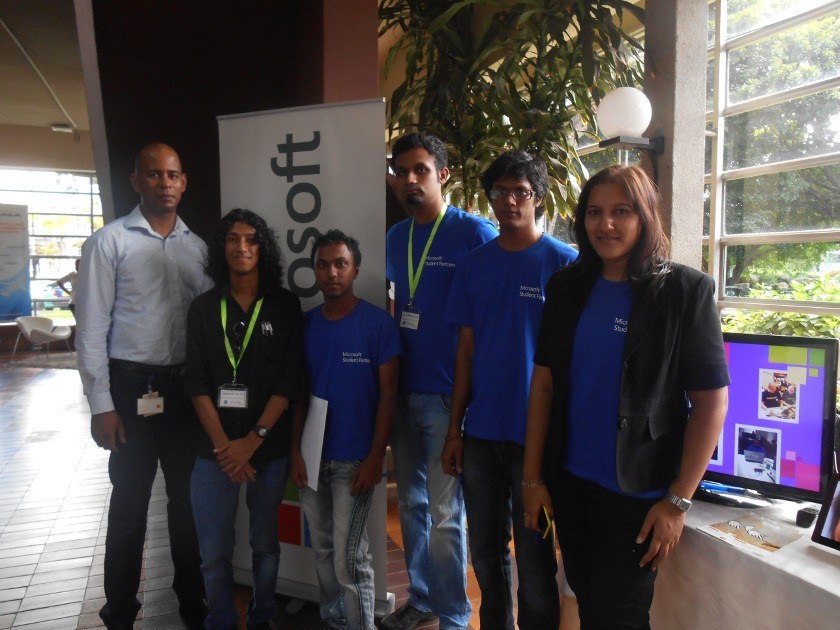 On day two, again I woke up late. Rushed to the bus-stop with two heavy bags carrying my laptops, cooling pad etc. I get in the bus and on the next bus-stop Pritvi gets in. #facepalm The day before I boasted that I’ll reach early next time but I am late again. Anyways, we had some geeky chat till university and he helped me carry the heavy load.

Pawan & Ajay called while we were still on way. They reached before us & started doing some advocacy. Nadim reached a couple of minutes later as we entered the auditorium. Saamiyah popped from somewhere cheering that she finally saw us in the bus. Well, long story cut short, Saamiyah, Pritvi and I we actually travel through same route except we never saw each other along the way (except Pritvi who lives nearby with me). That morning she saw (^^,)

Okies. Time to rock the floor. I fired up my Ubuntu laptop & my mom’s Manjaro notebook. Ahaan, I had to ask mom if I could borrow her laptop for a Synergy demo, she agreed. I was still hopping here & there, when Ratna showed up asking if I could do my presentation earlier. It was initially scheduled for 14h30 but since a slot was free I could do it at 11h30. I was all ok for that. My presentation would cover the aims of Linux User Group of Mauritius and a mini-demo of Synergy.

When it was presentation time, oops, auditorium had more college students than university folks. Now, how do I present a technical stuff to these cute creatures? I fired up my presentation slide, introduced myself and changed the topic completely. There was a mini round of clap with cheering when I did that. I guess they preferred a casual presentation than technical stuffs. So, I took the kids back in time & told them the story of Free Software and Linux. Oh! Not to mention, in the story of Free Software, Microsoft stands as a villain. It seemed like the kids enjoyed the story-telling since it ended with another round of cheering.

In the meantime, outside Ronny brought Linuxfest 2013 certificates. The day before I posted on facebook, calling those who’d be around the university to come and collect their’s. A few showed up. 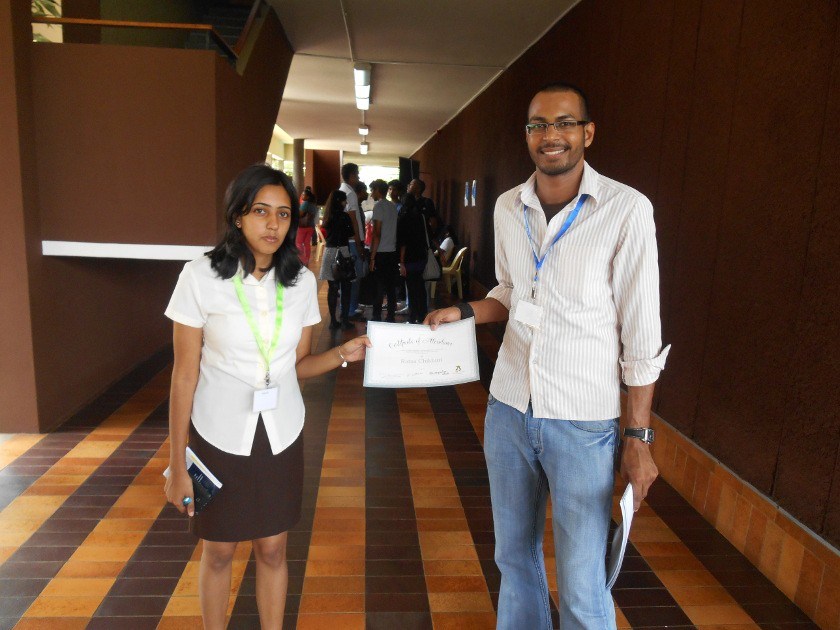 In the afternoon I asked Ratna if I could have another presentation slot targetted towards university students. She agreed as a slot was free, however, by 14h00 there was practically no one in the auditorium. I took a small group of geeks with me and hopped around the university calling for people who’d be interested with a Linux presentation. Some answered our call positively. Others went un-interested. We even went knocking a classroom & asked the tutor. The gentleman turned out to be another supporter of Free Software and granted his students a short break to attend the presentation. That was how I did my final presentation about the aims of the Linux User Group of Mauritius. (^^,)

The event ended on a happy note with a bunch of folks cheering in the cafeteria having tea, coffee & water.