Some time back while having a black coffee in the morning an evil idea lurked in my mind. I instantly posted about it on facebook. Folks were eager to know more. Later in the afternoon I detailed it in another post. It went like this: 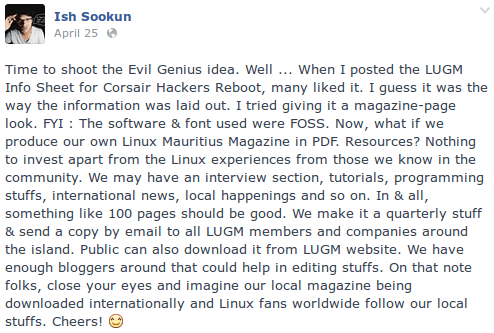 The response I got was great. Many liked the post & several others commented to further encourage. Two days later Nadim started a group discussion. The same pulled in several people into the pool, who might help with the project. At some point many of us got lost however, with the amount of missed messages & having to catch up with the backlog. Every now and then one of us had to publish a sum-up to help others keep track of what’s happening.

Then we decided the easiest way would be to publish the sum-up on LUGM instead. We could add required updates as & when we’ve decided stuffs. Basically the idea is to have a Linux Magazine that hightlights our local events & puts forward tutorials suited for local folks. The magazine would be designed & produced by LUGM members.

Discussion was also tossed to have an online version which ultimately would be nothing but just having more dedicated “writers” for LUGM.org. On the other hand an offline version of the magazine (PDF) would be suitable for those wishing to carry it on their tablets. On my end I’d vote for both.