The National Computer Board organized a two-day workshop on open source for enterprises which kicked off on Thursday 11 May 2017 at Le Meridien, Pte aux Piments. A few members of the Linux User Group of Mauritius received the invitation to the workshop. Not everyone attended though.

Pritvi, Ajay, Nirvan and I attended the workshop as members of the Linux User Group.

As I arrived, Vik Bhoyroo, Executive Director of the National Computer Board, was reading the welcome note. There was a speech by Malcolm Bain, Lawyer at Id Law Partners and then the Minister of Technology, Communication and Innovation, (Hon) Yogida Sawmynaden, read the keynote speech. If you’re interested to know what the minister said in his speech then you may read News on Sunday. I was particularly interested with the workshop and its aim. By the end of the second day, we will know that. :-)

There was a tea break during which I met several people, most of whom are the usual suspects when you’d mention open source. I sipped some hot coffee and listened to this conversation about Linux certifications. Jayantee Gokhool from the Agence Universitaire de la Francophonie (AUF) said that there does not seem to be much interest among professionals to get certified in Linux. Gavin Sathan, lecturer at the University of Mauritius and an ardent proponent of open source software, added that students tend to use Linux for one particular module or assignment and then it’s over. There is no continuous practice that would get them to develop the industry required skills. Kaniah Gooranah, System Administrator at the Centre for Information Technology & Systems (CITS) of the University of Mauritius, shared his experience working with Unix/Linux. We ended coffee over a joke about port 587.

Back to the workshop, Malcolm Bain described the objectives & goals of the workshop. By the end of which the attendees are expected to be able to:

Malcolm Bain is a founding partner of Id Law Partners, a law firm based in Barcelona specialised in Information Technology laws. Malcolm is also a member of the Free Software Foundation Europe (FSFE).

Day 1 covered the history of Free Software & Open Source, starting from the 1950’s when software was distributed freely with hardware without any license, mentioning the contribution of UC Berkeley that gave us the Berkeley Software Distribution (BSD), then Richard Stallman from the Massachusetts Institute of Technology, who wrote the General Public License (GPL) and started the GNU Project, etc.

Malcolm explained the differences between various FOSS licenses, what is strong and what is weak copyleft and how they all differ from proprietary software licenses.

There are benefits as well as risks in open source. In order to better understand those an activity was carried out where the participants from each table discussed among themselves how they could use open source software and have a positive impact on the socio-economic landscape of Mauritius.

One participant said that security is an issue with open source software as the source code is known to everyone. I tweeted that. It showed on Facebook as well and garnered some attention.

Why is it important to understand FOSS licenses?

FOSS licenses give the user several freedoms, like using, copying and sharing, at a minimum. However, the licenses could be tricky if one develops software based on existing FOSS code and limits the freedoms of the produced software. Malcolm talked about business models based on open source software and legal implications that one has to consider when deciding which license would suit the project.

During the question & answer session, there was mention of Patrick McHardy, a Linux Kernel Developer and core team member of the netfilter project, who was suspended from the project following allegations of license enforcement activities on parts of the netfilter software that he wrote. The Software Freedom Conservancy, a non-for-profit organization that promotes, improves, develops and defends FLOSS projects, called on Patrick McHardy to endorse the Principles of Community-Oriented GPL Enforcement. While replying Linus Torvalds in a heated discussion, Bradley Kuhn explained the Conservancy’s Linux GPL enforcement in simple terms.

On the second day the discussion was more business-oriented. Malcolm talked about FOSS revenue streams. Participants were asked to discuss and brainstorm on FOSS business models and how those could be beneficial to Mauritius. Ajay mentioned about training legal teams to advise companies, developers and engineers about FOSS licensing and implications. 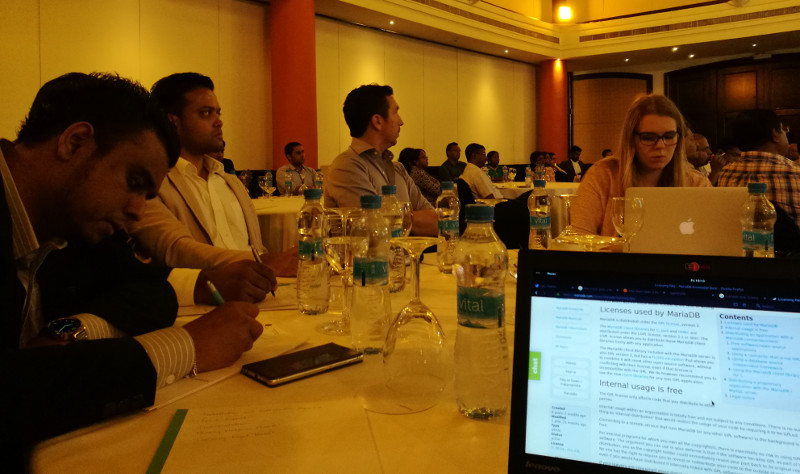 In the photo, Joffrey Michaie, a former employee of SkySQL (later changed to MariaDB Corporation) listens attentively to Malcolm.

Malcolm then talked about FOSS communities and their motivation. By the end of the day he reflected on the objectives of the workshop and whether the participants understood the same. He asked those who believe they have technical difficulties in adopting open source to raise their hands. Nobody did and Malcolm had to press them to be honest. At that point about half of the room had hands raised. He then tells the participants that you have a Linux community in Mauritius and you should be able to reach out to them and get technical help. It’s all about motivation and commitment. It is futile for a third person to intervene and advise if you’re not committed to take the step.

I believe the two days should be beneficial to those who do not have exposure to open source software in their daily routine. They must now be familiar with certain terms, if they took notes. :-)

On the 20th May 2016, Cabinet agreed to implement the National Open Source Action Plan. Slowly but surely we’re getting there. May the FOSS be with You! 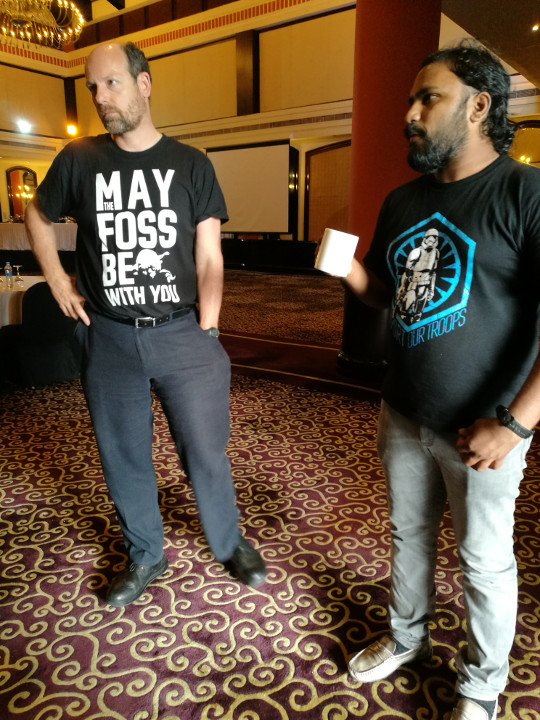 Pritvi finishes a last coffee for the day next to Malcolm Bain, who just ditched the corporate attire.